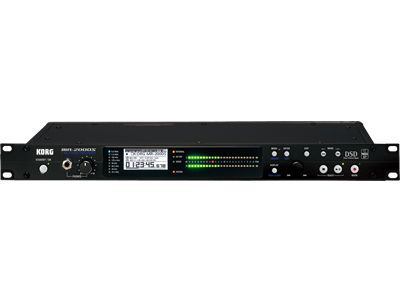 Projects
Recognizes a maximum of projects four hundred projects of each folder. Management of up to 160,000 Projects

Improving MR-Link
The gap between MR-Link Master-Slave has been reduced to less than 3mSec.

Change to the Marker Function
Processing has been given up to write the markers registered in MR-2000S as meta-data in an audio file (DSDIFF and WAV), so that the process finishes soon after stop of recording in such formats. From now on, when you want to register the markers that you registered in MR-2000S into meta-data of an audio file, please put it as a MR-Project in AudioGate, and do Export it as an audio file.
The process for registering markers as meta-data for DSDIFF and WAV files has been moved to the AudioGate software. MR-Projects can be imported into AudioGate where markers can be placed, and then the file can be exported as an audio file with those tags attached.

Bug fixes
Known issues with mp3 playback have been addressed.
The shuffle-playback has been improved. -

Requirements
Updating the Operating System of MR-2000S from a PC or MAC via USB.