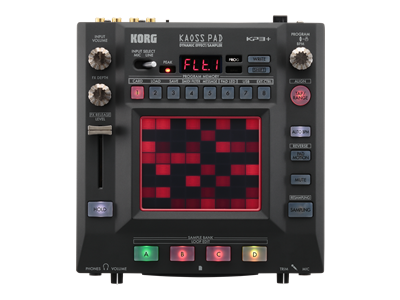 Use the touchpad to control effects in real time 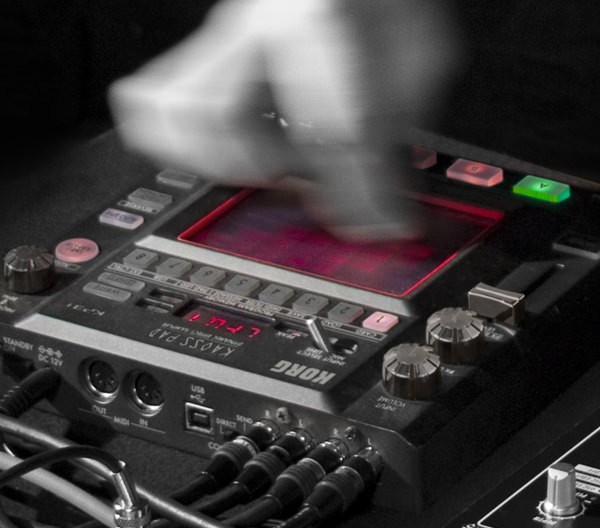 The intuitive design and amazing flexibility of the touchpad allows Kaoss Pad 3+ users to easily control multiple effects and parameters by simply tapping or rubbing the Kaoss touch pad with their finger. Using this remarkable design, you can easily control multiple effects in complex ways that would be difficult or even impossible on a conventional effects unit or would require dedicated software plus a MIDI controller to achieve.

A total of 150 effects ideal for remixing, DJ and live music applications, and in-studio use.

The KP3+ provides new effect programs that are worthy of its status as the flagship model of the Kaoss Pad series. The KP3+ contains a total of 150 programs - 22 more than the original KP3.
In addition to the 108 effects carried over from the KP3, which include filters, spatial-type effects such as delay and reverb, a grain shifter that freezes tiny pieces of sound and repeats them, and a vocoder, there are 42 new or improved effects that represent today's dance music scene, including effects that were newly developed for the Kaoss Pad Quad, such as the Looper, Vinyl Break, and Ducking Compressor.

It's easy to obtain the scratch sound that's heard when you scratch a turntable, or use a record-stop effect. In addition to the basic Mod.1 Vinyl Break, the KP3+ also provides the new Mod.2 Break Reverb which adds reverb to the effect, and the LoP.2 Break Looper and LoP.8 Loop Breaker effects which combine the effect with a Looper.

You can use a side-chain effect to emphasize the backbeats of the kick. In addition to Mod.8 Ducking Compressor, there's a new rEV.1 Pump Reverb that adds a reverb effect. You can add a sense of “breathing” to your music by dynamically varying the reverberation in synchronization with the BPM.

For greater usability, the Looper effect has been modified to let you loop the sound starting from the instant you touch the touchpad. The existing programs have been significantly updated; for example, if you move your finger to change the number of beats in the loop, the timing of that change will automatically be quantized. There are also many new programs such as LoP.4 Freeze Looper, LoP.6 Shuttle Looper, and the LoP.7 Slice Looper that finely slices a phrase and loops the location that you choose.

Effects for breaks and drops

New effects include dLY.2 Echo Break and rEV.3 Reverb Break, which mute the input sound and generate delay or reverb. These are ideal ways to create breaks in your DJ play.
We've also enhanced the synth sound effects that are effective when used during a break, bringing them up to date for the evolving dance music scene. Newly added sounds include Syn.3 Pump Noise (noise without resonance, processed by a side-chain effect) as well as Syn.4 Lofi Synth and Syn.9 Resonator.

Other added effects include FL.16 Center Canceler for partial vocal cancellation, LFO.1 Jag Filter which uses a non-resonant filter to chop the sound, dLY.5 One Delay which shines on styles such as hip-hop, and Grn.6 Stutter Grain which alternately applies a grain shifter and a Looper. We completely rethought the X-axis and Y-axis parameter assignments and their polarity, and included flashy and glittering synth sounds as well as many more effects that will enhance the latest sounds of today's scene.

The FX Release function automatically adds a delay to smoothly blend the effect when you release the touchpad. The Mute function cuts the input sound, leaving only the reverb or other effect sound, and can also be used as a "transformer" by turning it rapidly on and off. Pad Motion lets you record and play back the movements of your finger on the touchpad.

There are eight program memories that let you instantly select your favorite effect programs, and a Hold effect that sustains the effect even after you release your finger from the touchpad.
The pad LEDs illuminate along the path that’s traced by your finger, letting you perform without difficulty even in a dimly lit DJ booth. We've modified the way that the four sampling bank LEDs illuminate to make them more intuitively understandable than on the KP3; they now light up red during recording and green during playback. 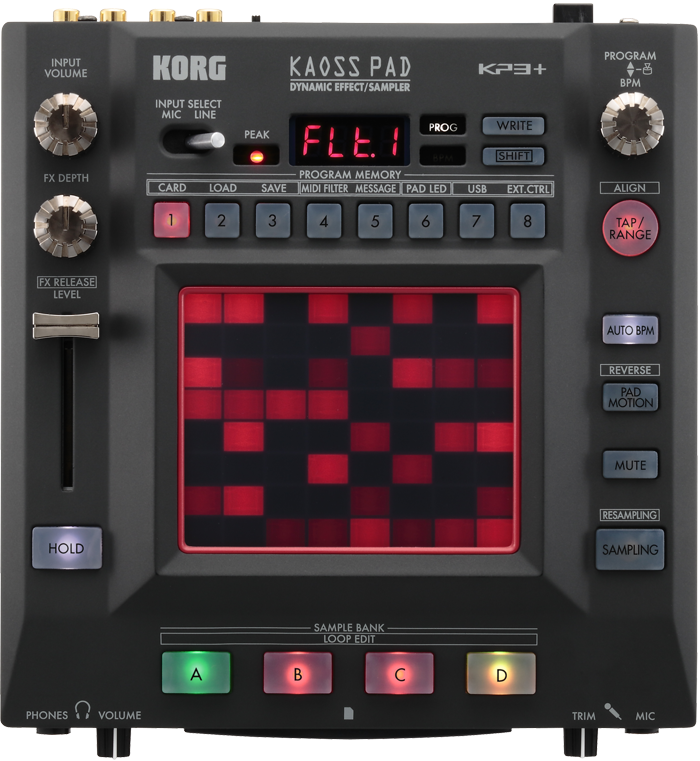 The KP3+ features enhanced sampling functionality that lets you perform using multiple effects and samples. Each of the four sample banks can record a sample up to 13 seconds long (*1), and play it either as a one-shot or loop. The KP3+ also has functions such as a start point adjustment that lets you create a half-beat shift to create "doubled" effects, a new slice function that edits the structure of a loop sample to instantly create completely new phrases, and a resampling function that lets you apply an effect to a sample and then re-sample the result.
Samples can be triggered in four different ways as appropriate for your situation. The volume of each sample bank can also be adjusted by the LEVEL slider or the touchpad, either together or individually.
*1: The number of seconds of sampling will depend on the BPM of the audio input and on the sampling settings. 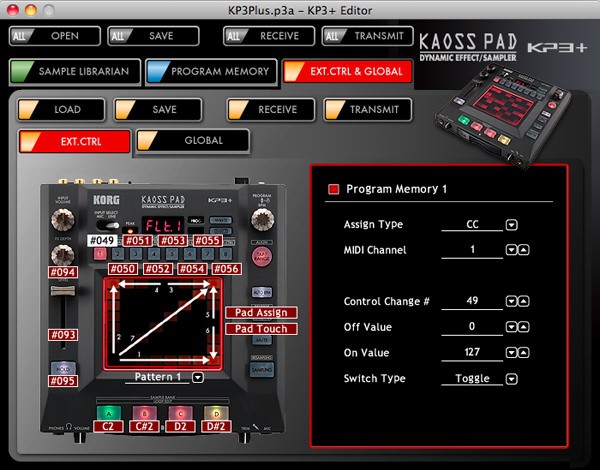 With MIDI IN/OUT jacks and a USB port, it's easy to control external MIDI devices. Loop data and user settings such as programs can be stored on an SD/SDHC card. The KP3+ Editor* is also available, which provides sample data librarian functionality as well as a MIDI assignment editor.
* Runs on Microsoft Windows XP (SP3 or later) / Vista (SP2 or later) / 7 (SP1 or later) / 8, and on Mac OS X 10.5 or later.