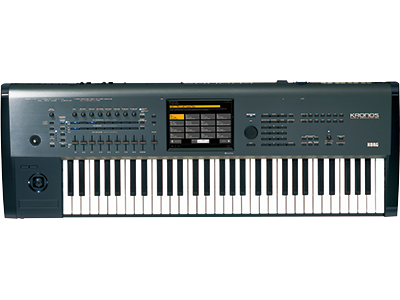 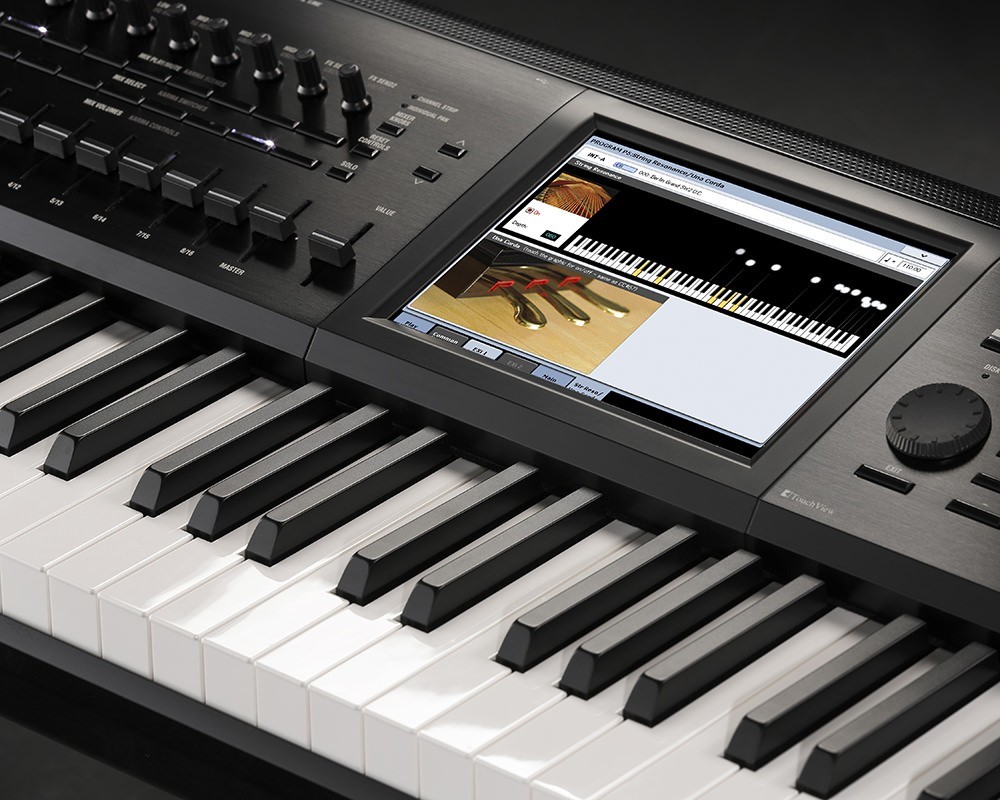 Each of the individual KRONOS sound engines is eminently qualified to operate as a stand-alone synthesizer. And each one represents the cutting-edge technology available for that type of sound creation. Exacting programming parameters, real-time controllers, integrated effects, and assignable modulation routings provide incredible control for the creating custom edits or for the ambitious sound designer.

The KRONOS piano engine has always offered huge collections of non-looped/natural decay stereo samples, recorded for every key, with additional unique tools to customize the piano to your needs. Inheriting all of this SGX-1 functionality, the new enhanced SGX-2 Grand Piano engine introduces the new Berlin Grand piano to the existing deep German Grand and lively Japanese Grand. The Berlin Grand offers resonant piano sound with a striking sense of depth.

Artist Signature Programs provide the priceless sounds actually used by top-ranking musicians. Additional Song Programs are named for the classic rock and pop songs whose signature keyboard sounds these programs recreate. Use these universally well-known sounds to pay homage to the originals, or as the basis for personal sonic explorations.

* SSD capacity is subject to change without notice.

KRONOS can organize all of the resources you need to get through a song—or a set—using the Set List mode. Using the Set List mode, the TouchView display can host 16 color-coded touch-screen buttons; each one can instantly call up the appropriate Preset, Combination, or Sequence—regardless of mode!

You can even add handy performance notes (“Sing on Chorus;” “Transpose Down;” “Wait for Sax Solo;” etc.) to each one.

The Set List mode even adds a nine-band graphic EQ, allowing the overall tone to be tweaked to match the venue. New in OS version 3.0, Set List mode now allows for deeper customization with many slot color options, text size variations, and a full-screen text editor. Connecting a USB computer keyboard makes it simple to enter text and numeric values.

In addition to simply selecting a sound or choosing a parameter with the touch of a finger, the enhanced Touch-Drag ability allows more detailed control of parameter values. Interactive instruments and panel graphics provide the ability to do everything from adjusting the lid of a grand piano to connecting patch cable on a semi-modular synthesizer model.

The TouchView display also hosts a convenient new Search Function, allowing you to search for (and preview) sounds based on their titles.

In addition to MIDI and Audio tracks, the onboard sequencer is loaded with valuable tools to transform your musical ideas into a complete composition, using realtime and interactive techniques that are unavailable or cumbersome to use on a computer-based system.

First appearing on KORG’s Karma Music Workstation in 2002, this revolutionary algorithmic music technology instantly produces sophisticated phrases, drum grooves and full-blown backing tracks. Based on the notes and chords you play—and the intuitive operations you perform with the knobs, sliders, and switches—KARMA can create musical effects that exceed anything you imagined. Now in its greatly-enhanced second generation and offering features like KARMA Wave-Sequencing, Note Mapping and 8 scenes per layer, KARMA is standard equipment on your new KRONOS. It will expand your conception of a song, and will be an enormous asset to your live performances. 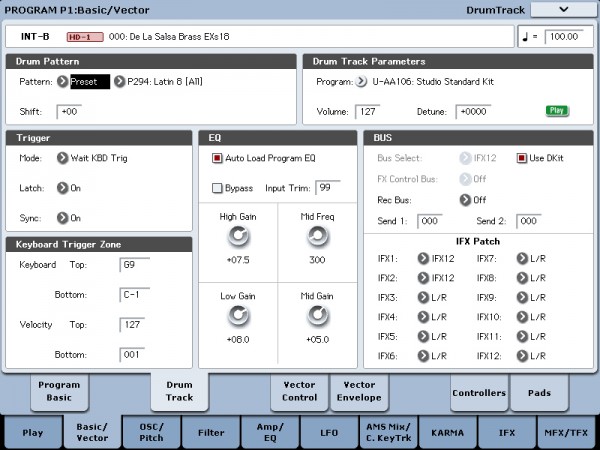 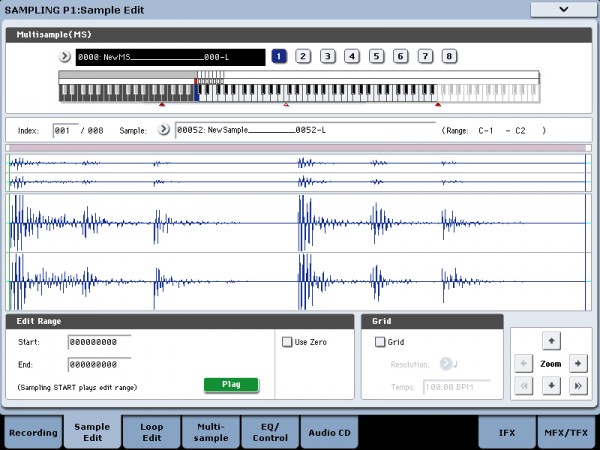 This function that plays drum patterns automatically was included and highly acclaimed on the M3 music workstation/synthesizer that appeared in 2007. KRONOS is the latest KORG Workstation to offer the Drum Tracks features. First appearing in 2007, Drum Tracks can create everything from a simple reference beat to an outline rhythm track on up to a full-blown drum track for your music productions.

Expanded for use in the KRONOS, Drum Tracks now includes professional drum performances, and is ready and able to generate grooves that capture the distinctive feel of a pro drummer, and that challenge the capabilities of stand-alone drum machines.

Using KORG’s Open Sampling System, KRONOS can quickly sample an external audio source, regardless of whether KRONOS is in the Program, Combination, or Sequencer modes. The Open Sampling Mode can even resample the performance of the KRONOS itself. The user sample bank, which extends the convenience of the EXs sample library to user samples, allows custom samples to be loaded and played, taking advantage of the gigantic SSD capacity.

AIFF, WAV, SoundFont 2.0, and AKAI S1000/3000 format samples can be loaded into memory via USB memory. Additionally, you can use a USB Ethernet adapter to exchange large amounts of sample data with your computer at high speed. Instruments or samples that you've previously created on your PC can be used to construct a music production setup based on just the KRONOS itself. 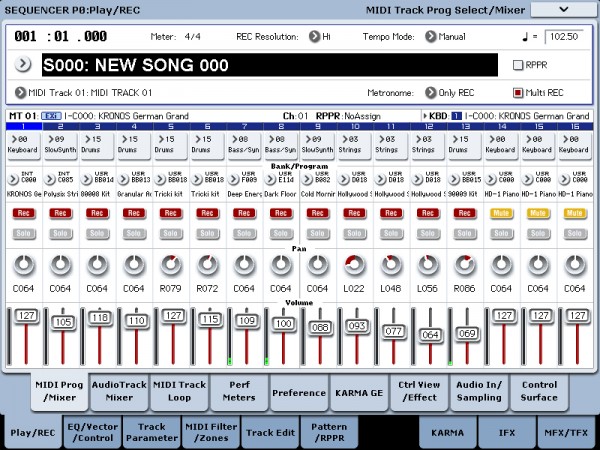 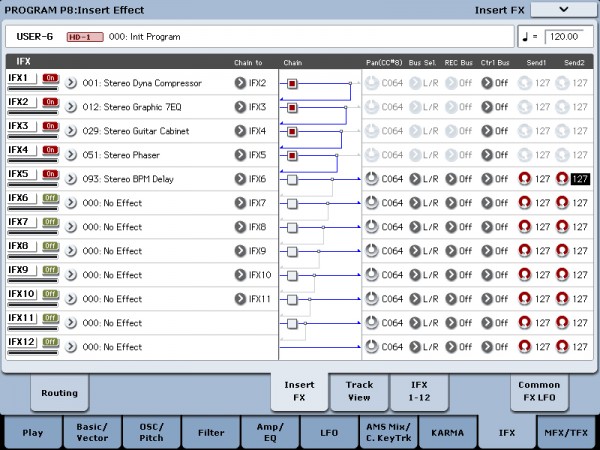 KRONOS features a sequencer/recording section that offers both 16 MIDI tracks plus 16 audio tracks; a great resource for putting together a dazzling performance or a brilliant production. MIDI sequencing makes it easy to capture ideas, inspiration, and pro-quality phrases using the KARMA, Drum Track, or RPPR (Realtime Pattern Play/Recording) functions.

The 16-track audio recorder simultaneously captures up to four tracks of 16-bit/24-bit uncompressed data at a sampling rate of 48 kHz. Play along with recorded tracks, add effects, and then resample the KRONOS itself and place the resampled WAV files directly in a track. When polishing your tracks, feel free to use mixer automation and editing functions such as copy, paste, and normalize to get the results you want. Plug in a USB CD-burner and assemble your album right from the TouchView display!

A separate three-band EQ is provided for every timbre, for every sequencer track, and for every audio track for adjusting subtle tonal balances or for creatively modifying the overall sound.

Any class-compliant USB-MIDI controller can be connected directly to the KRONOS. If you connect a KORG pad-equipped USB MIDI controller (nanoPAD, nanoPAD2, padKONTROL), pads 1 through 8 of the controller are automatically mapped to the virtual chord pad function of the KRONOS, allowing them to be used to play drums, trigger chords, or to switch chords in chord mode.

Smooth sound transitions that eliminate dropouts when changing sounds, regardless of the mode you're in

When you switch program sounds during a performance to get ready for the next section, or when you switch from Program mode to Combi mode, the sound that's currently being output is always given priority and its effects are maintained during the program change, ensuring a seamless transition with no dropouts. This function has also earned extremely high praise from pro musicians. 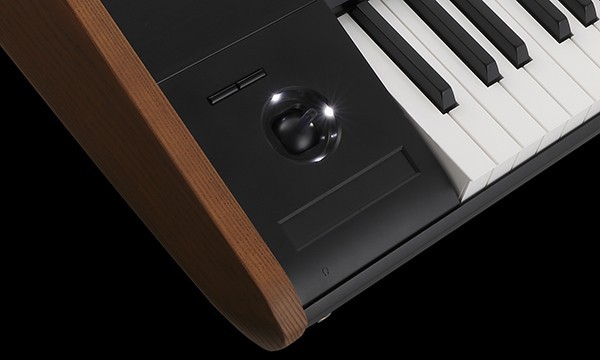 In addition to the parameters accessible directly from the TouchView display, KRONOS also offers a wealth of realtime controllers to enhance any performance and to aid navigation. A four-way joystick, ribbon controller, and two assignable switches are located to the left of the keyboard. An additional Vector joystick is nearby.

Above the keyboard, nine sliders, eight knobs and a number of switches provide realtime interaction with features at the heart of the KRONOS’ impressive sound. The damper pedal input jack supports half-damping, providing one more level of piano realism. In addition to the damper pedal jack, there are also two assignable pedal inputs, one footpedal type and one footswitch style.

Both the 88- and 73-key KRONOS models use KORG’s finest RH-3 Real Weighted Hammer Action. Offering an authentic and accurate piano feel, there are four zones, ranging from heavier to lighter, to provide a more true piano playing experience. Even the 88 key model is slim enough to place on a standard keyboard stand. The KRONOS achieves the perfect balance of functionality and design.

For those who prefer the ultra-quick response of a synthesizer keyboard, need to focus on organ performances, or are seeking the ultimate in portability, the KRONOS 61-key model is equipped with a lightweight and expressive semi-weighted synthesizer action. 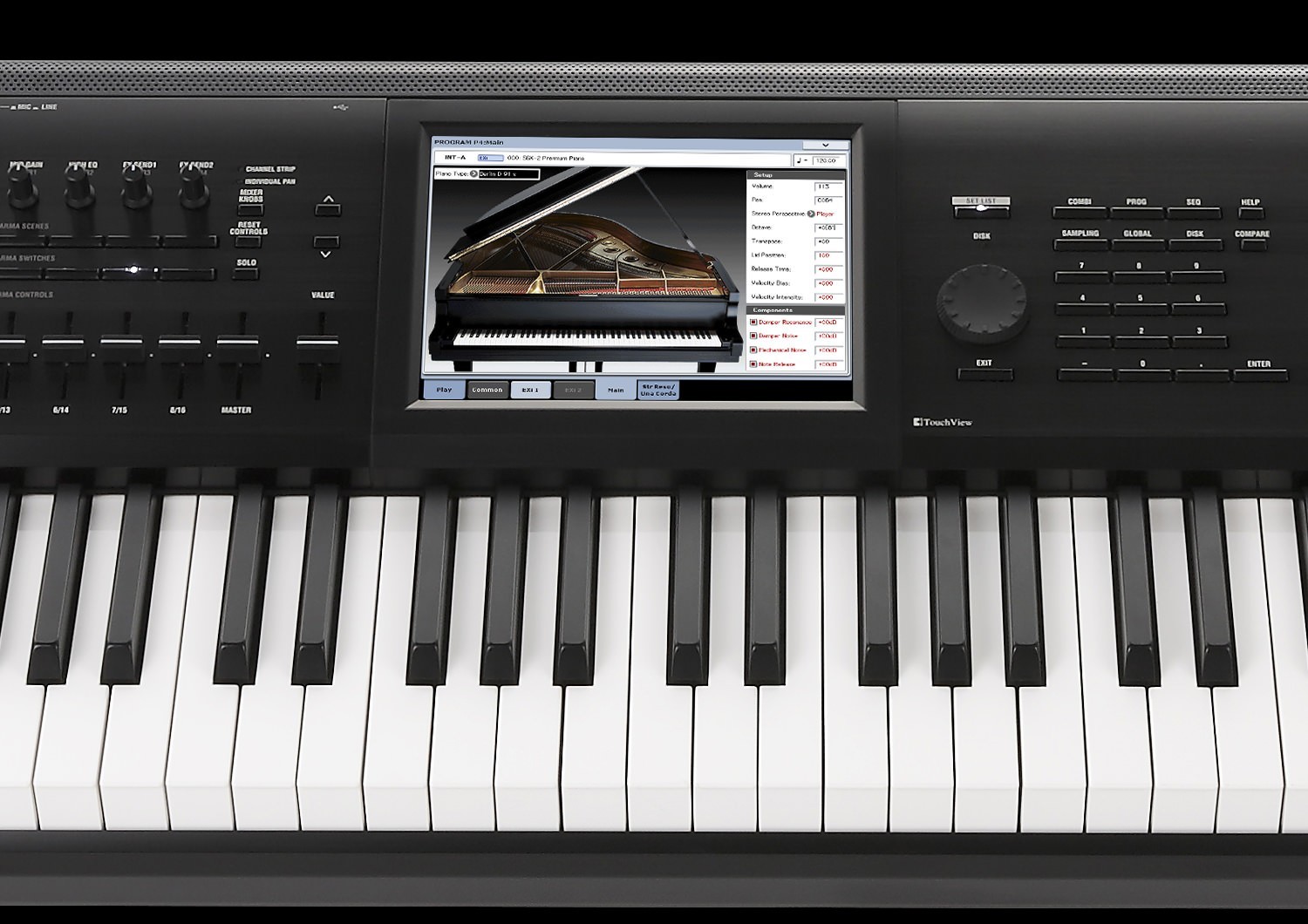