The AudioGate v3.0.3 is now available for free download. 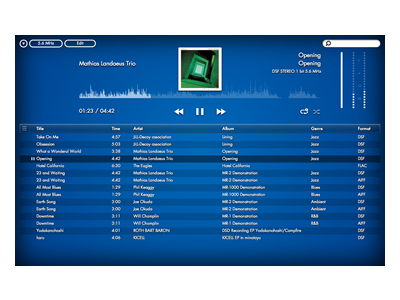 1. The AudioGate 3 software can be used by anyone, but a "KORG DS-DAC or MR series product" is required in order to activate the software.
*Users who do not own a KORG DS-DAC or MR series product can only use the lite version. Please refer to the Activation section below for more info.
2. Please install the DS-DAC Driver first.
3. Also, please read the latest AudioGate System requirements before you install the software.

■Changes and revisions from v1.0.5

- Mac models produced after Mid 2013 are now supported
DS-DAC Driver supports Mac models with Haswell family CPUs
- Only OS X 10.9 (Mavericks) and 10.10 (Yosemite) are supported, including a behavior where the DS-DAC driver was not recognized by OS X 10.10

- DS-DAC driver uninstaller has been added.
This application is in the uninstaller folder in the download data. You can use it when you need to remove the driver and the Control Panel.

‐ DS‐DAC Driver uninstaller is added.
This application is in the Uninstaller folder in the download data. You can use it when you need to remove the driver and the control panel.

Improvements:
Editing functions have been expanded
- AudioGate 3 now supports editing functions*1, such as Export and Burn Disc, Mark function, Control Gain, Balance, Fade, DC Cut, Divide, Combine, Channel Link, which are limited in the Player version. Almost all of the editing functions which were supported in AudioGate 2 are now available in AudioGate 3.
- AudioGate 3 now displays the waveforms*2 of each L/R channel in the edit screen. This improves the ease of editing when using functions such as Divide.
- Added the Normalize button on the edit screen. You can set an appropriate overall Gain value using this function.
- Added Balance, Gain, Fade, and DC Cut*3 settings in the Batch Edit Song Information function.

*1 You need to activate AudioGate 3 to use the Export and Burn Disc functions.
*2 The waveform does not support displaying the state of edit parameters such as zoom and Gain/Fade controls.
*3 The setting of Balance, Gain, Fade, and DC Cut parameters on the edit screen supports the current song only.

Install on Mac OS X Lion/Mountain Lion/Mavericks
If you have a problem installing AudioGate 3 on those Operating Systems, please refer to the FAQ.
Activation
Either a KORG DS-DAC or MR Series product is required to activate the AudioGate 3.
Follow these steps to activate the software after installation:

NOTE: Although this process is usually required just once, you may be asked to repeat the activation process occasionally depending on the computer configuration.

Customers who did not purchase a KORG 1-bit product (DS-DAC or MR Series):
1. Launch AudioGate 3 and the activation process will begin.
2. Click the [Lite Version] button.
3. AudioGate 3 Lite is now ready for use.
If you later purchase a KORG 1-bit product, it comes complete with an AudioGate3 license. To activate AudioGate3 simply click the menu button and select [Help] – [Activation] to begin the activation process.
Limitations in the Lite version
1. User support is not available from KORG Inc., or its regional distributors.
2. The Output Sample Rate is limited to 48 kHz and 44.1 kHz.
3. Real time Conversion is limited to Lite Load only.
4. Export and Burn Disc functions are not available.
Precautions for using the DS-DAC Driver v1.0.7 (beta) for Mac OS
The purpose of this revision is to assure compatibility with Mac OS X 10.10 and with Haswell CPUs. If you are using OS X 10.9 and a problem occurs in driver v1.0.7, please revert to v1.0.5.
(The installer of v1.0.5 is "KORG USB Audio Device Driver105"(.PKG) in KORG AudioGate and DS-DAC Setup > KORG_DSDAC_DRIVER_1_0_7 > KORG USB Audio Device Driver.)

Note 1:
If installation fails, please remove the driver files with the "DS-DAC Driver Uninstaller" before attempting to install again.

Note 2:
Instruction manuals for each DS-DAC model are included in the download and you can access them from the “Setup” application. Please refer to the instruction manual and the owner’s manual included with your DS-DAC.
< Faq