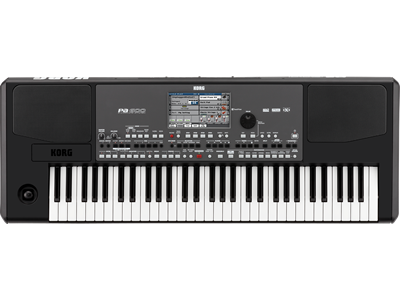 It all begins with the sound. Korg’s sound quality is universally recognized as superior, and relied on by musicians around the world. The Pa600 gives you a rich, detailed, sophisticated natural sound with musical instruments from almost every genre; exploding with depth, nuance, subtlety, and accuracy. The DNC (Defined Nuance Control) system adds finely tuned control, and provides various levels of articulation. There are also several sounds distilled from the OASYS, (one of the most powerful synthesizers ever made), helping the Pa600 set a new standard for arranger keyboards. Over 950 sounds are preloaded, including a refreshed GM sound set, and 64 drumkits. There is also an amazing multilayer stereo acoustic piano that was accurately sampled from a Concert Grand, and includes String and Damper pedal Resonance. Sounds are fully editable and changes can be saved in the User area.

One very exciting feature added to the Pa600 is the option of purchasing musical sounds and styles particular to specific regions around the world. Up to 96MB of additional PCM allows many instruments to be accurately added to the Pa600 sound engine and used with styles that were developed to represent many of the popular musical styles of certain countries. Full details on the available options can be found at Korg.com

Great sound is more than just the quality of the PCM. For many years, Korg has produced outstanding studio quality effects that are simply breath-taking. The Pa600 has four Stereo Master Effect processors with 125 of these effects including standard FX such as reverb, delay and chorus as well as some of the universally acclaimed REMS guitar-based effects for authentic guitar tones.
Each Track features EQ with Low, Mid and High controls. A custom track EQ can be memorized in the general preferences for the Song Play mode. This will help sculpt the sounds to your personal taste for any MIDI file you play. Need a lighter bass track? Save the desired equalization, and the Bass will stay light with all the subsequent Songs.

A limiter and final 4-band parametric EQ, have been added to the sound output of the Pa600. Everything can be processed by this powerful and musically refined EQ, easily adapting the sound to your musical taste or adjusting sound in a problematic live environment.

The Pa600 delivers a new set of deluxe styles, programmed by some of the leading arrangers in the world, each of whom worked according to their musical strengths. The result is hundreds of preloaded Styles that provide unparalleled realism and detail. Covering an expanded range of musical genres, the Pa600 provides styles for almost every occasion. If you require a special Style collection, simply record and edit your own styles on board.
We add further realism to your performance with four Fills, Break, three Intros and three Endings. More flexibility is added by the choice of different transposition tables to suit any instrument characteristic, and the stunning Guitar Mode 2 adds a totally new perspective to how realistic Guitar tracks can sound. If you need both hands to play a solo passage, record your chord sequence and let the Pa600’s Chord Sequencer play it for you.